My kids have been off from school since Thursday in preparation for Hurricane Florence. The county is being magnanimous and using a handful of schools as shelters for evacuees from the coast. Instead of cancelling these designated schools, all 175 schools have been off. My kids were also taken out of school in observance of Rosh Hashana on Monday and Tuesday. So essentially this is like a second summer vacation for them, only after two weeks of school.

The first two days, the kids played outside and spent time with friends. My middle child learned to ride his bike independently after months of struggling, which was a huge win for him!

Now, It’s pretty much survival of the fittest around here. My parenting skills aren’t going to win me any prizes. This morning consisted of Mike reading the kids 802 pages of the second book of Harry Potter, followed by a 3 plus hour viewing of the movie (including commercials). During the Harry Potter marathon, I disappeared to the gym that I have been making donations to for the last few months. (I have been working out, just not there. They only have a pull up bar for me to hang upside down on.)

After a 2.5 hour workout, I came home exhausted. I allowed the kids to entertain themselves for about 45 minutes by talking to Siri on an old cell phone, while I stared like a zombie at my phone.

“Siri- are you a poopy butt?” “Siri, do you like to eat hot dogs?” “Siri- when was the last time you farted?” Yes, I allowed this to go on for close to an hour. I contemplated taking the chipping nail polish off my nails, but that required too much effort.

Afterwards, I cleaned out the old food in the refrigerator. This consisted of purple sour cream, red ricotta cheese, green moldy apple pie, and some old yellow corn that smelled like dog vomit. (I may be embellishing just a little on the colors of my rotten food.) It was definitely an experience that delighted all of the senses!

My culinary skills have been on point this weekend as well! Around 4pm, after someone told me that they didn’t have lunch, I allowed them to dine on a nutritious meal of chips and queso dip. I had to be reminded about 6 times to boil water for the pasta that my kids will feast on for dinner. Fancy, right?

The kids are fighting, making weird noises, and I am trying to write. Mike found a bottle of Jagermeister older than my eldest child and figured we should finish it off. (There was only a shot and a half left- not even enough to take the edge off).

Mike is now trying to play chess with the kids, while I type this post on my phone. My 4 year old daughter, who oddly has a better understanding of chess than I do, is screaming for a turn. I tried for 30 seconds to calm her before giving up. I think Mike may be up for some parenting awards between the Harry Potter bonanza and this chess tutorial. I probably wouldn’t even be considered for an honorable mention.

I can’t wait to see what tomorrow brings! I am looking forward to my dentist appointment on Monday. I hope it isn’t cancelled. 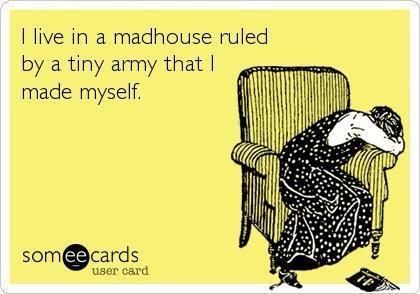